When my husband and I moved to Osaka in late August 1979, we left our youngest son, Habaku, in Tokyo as he had been accepted to a good high school there.

A week later, on August 27, I received a call that Habaku had suddenly died of a heart attack while swimming in the ocean. We had not yet unpacked our boxes but grabbed our mourning clothes and rushed to the scene.

At the funeral we saw our son in the casket. Because he had such a gentle smile on his face, as if he were still alive, I wanted to open the casket one more time. Yet we had to bid him farewell.

To me, his mother, he was an impeccable child; he was lovable and kind and possessed an inner fortitude. He sang hymns, read the Bible, and prayed with tears. My husband once said, “This is a child we must dedicate to God.”

I never dreamed that just one week after leaving him in Tokyo we would be offering him to God in such a way. He was only fifteen years old.

The man who had taken my son and his friends to the ocean looked all worn out. But he told us, “Right after he passed away, I saw a lucid dream of Habaku rising to heaven.”

Makuya youths who were the same age as Habaku were greatly impacted by his death and placed his picture on their desks. The memory of Habaku inspired them to live their purposes on earth and make their friend proud.

The Heart of My Father-in-Law

Ever since we were young, my husband and I have desired to convey the gospel of Christ. Sometimes we relocated because of ministry, hoping to serve Him wherever we went. However, one year after our son died we moved back to my husband’s hometown, Hamada in Shimane Prefecture to care for his aged parents.

My father-in-law loved his grandson Habaku and repeatedly blamed me for his death. “If you hadn’t left him alone in Tokyo and had looked after him properly, this never would have happened.” Then one day my bedridden father-in-law called to me and said, “Oh, Chizuko-san! Can you see that?” With eyes wide open, he gazed toward heaven and said, “Habaku is now rising straight up to heaven! Habaku! How courageous you look!”

After that incident he would say, “Let me pray before the seven lights.” He was referring to the menorah—the seven-branched lampstand from the Bible placed in front of the Holy of Holies, symbolizing the presence of God. (Read Exodus 25; Zechariah 4; and Revelation 1-2.) When we pray in Makuya, we kindle a menorah before us. This is what my father-in-law was talking about.

For a month afterward he continued to pray to Christ and then went up to heaven peacefully. My husband said, “Habaku, you did it!” The vision my father-in-law had seen so closely resembled the dream of the man who had taken Habaku to the ocean. Although our son passed away at a young age, our hearts found comfort and peace knowing that his soul was truly flapping his wings in heaven.

Then the Lord Will Take Care of Me

Just recently a woman who had taken care of my son in the dormitory found Habaku’s Bible and sent it to us. Without thinking, I turned to Psalm 27, one of my favorite passages, and found that my son had written some notes beside verse 10. Where the verse reads, “When my father and my mother forsake me,” Habaku had rewritten these words in a child’s handwriting: “Because my father and my mother have forsaken me.” After that verse he inserted the word But before these words: “Then the Lord will take care of me.”

At first I chuckled, but after a while I started to tear up. Although my son had begun living in a dorm in his early teens, I thought he enjoyed being there with his friends. Yet he may have felt he had been forsaken by us, his parents. I called to my son, “My dear Habaku, how much you were cherished by your parents, brother, and sister! But you discovered God, who is far greater than even your mom and dad during your short time on earth, and you returned to Him in heaven. I miss you so much … but now I know what you really wanted to do. You used to say, ‘I wish many people to encounter the true God that Makuya people know. I want to be a minister to convey our faith [of the original gospel] worldwide and even to the universe!

“Oh, Habaku, I believe now you are happily working in heaven.” 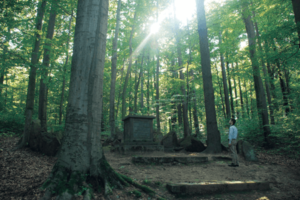 United through Prayer —Visiting a Holy Site in Europe— 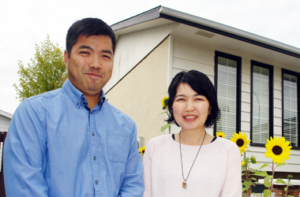 Living with Faith and Myasthenia Gravis: “Jesus Lover of My Soul”